This solitary wooden cottage on the Norwegian island of Vega was designed by Swedish studio Kolman Boye Architects to resemble the weather-beaten boathouses that are dotted along the island's coastline (+ slideshow). 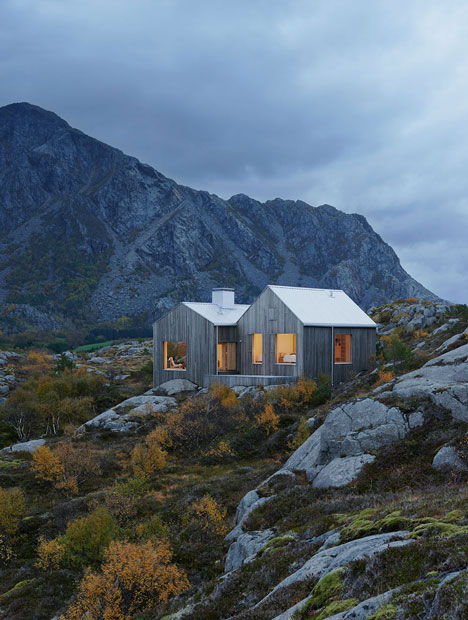 The traditional sheds, known as Naust, are common to Norway's seaside towns and villages, so architects Erik Kolman Janouch and Victor Boye Julebäk decided to pay tribute by creating a small residence that resembles a pair of cabins. 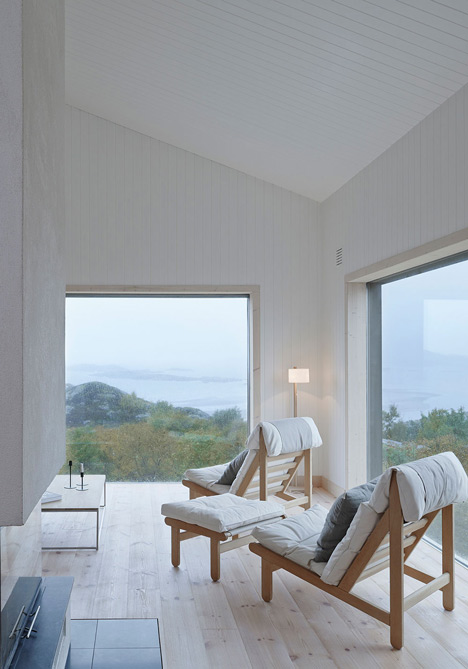 "We have aimed to build a contemporary Naust with an unpretentious presence and a distinctive character, developing themes from the vernacular architecture," they said, referencing the simple materials and gabled profiles. 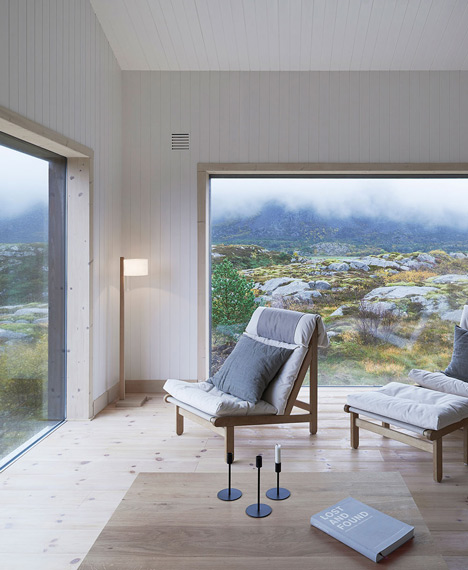 Vega Cottage was built over the uneven terrain of a rocky outcrop near the coastline. "The site is distinctive for its grand and harsh northern landscape with wide panoramas of the Norwegian Sea and the jagged mountains rising from it," said the architects. 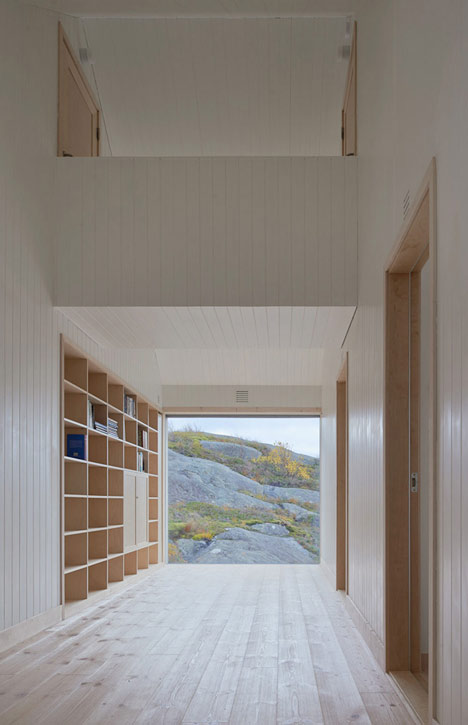 A pathway leading to the entrance sits within a natural ravine, so as not to disturb views across the landscape. As a result, the house appears to be completely cut off from any other traces of civilisation. 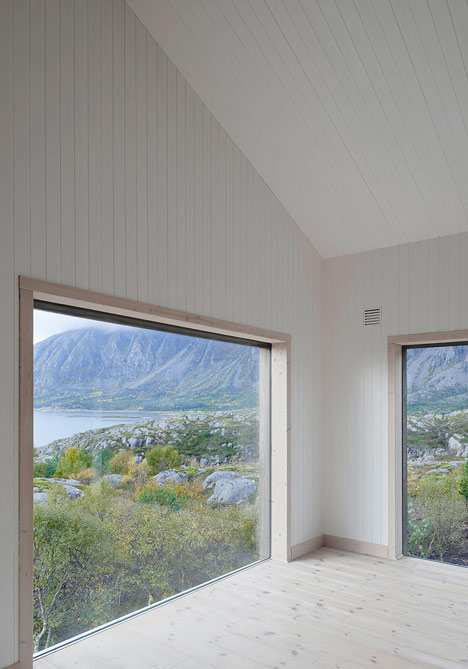 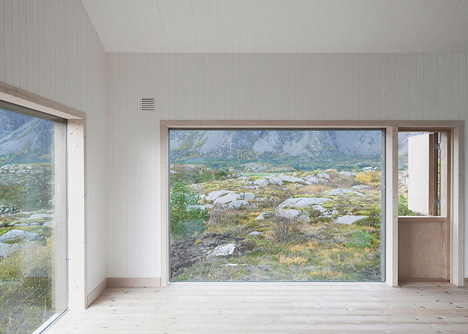 "The interior is kept subtle with a character of being hand-built, promoting tactile qualities and the attractive patina developed over time," added Kolman Janouch and Boye Julebäk. 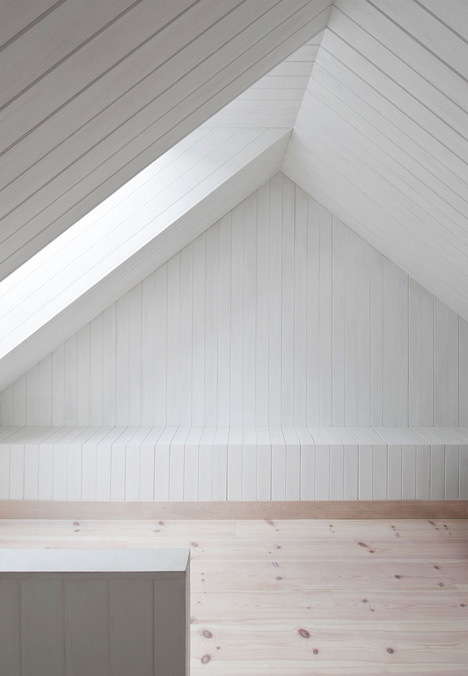 The largest space in the two-storey building is a family living room that occupies one half of the ground floor and features a stone fireplace. 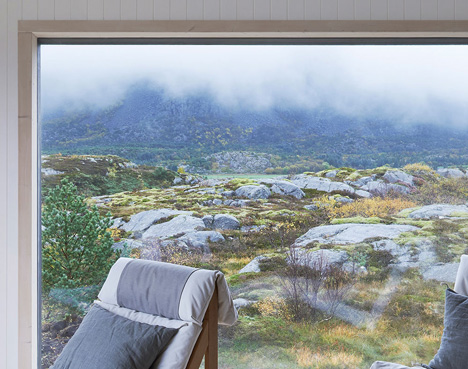 Two oversized windows offer views out towards the ocean and the surrounding mountain range, while a door opens the space out a terrace flanked by two walls. 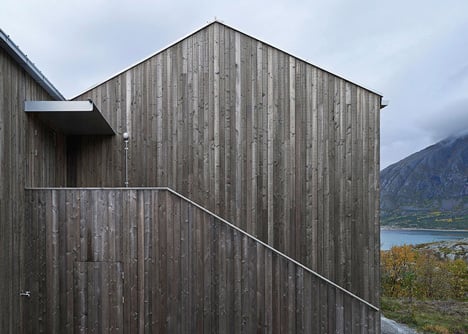 Other spaces on this floor include a lobby with a wall of storage. Bedrooms and smaller family rooms are located upstairs. 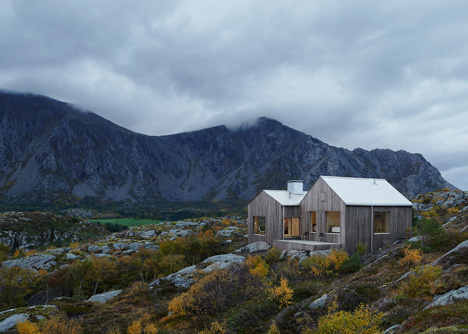 Photography is by Åke E:son Lindman.

Read on for the full description from Kolman Boye Architects:

The house stands on the island of Vega in the Norwegian archipelago not far from the polar circle. The site is distinctive for its grand and harsh northern landscape with wide panoramas of the Norwegian Sea and the jagged mountains rising from it. 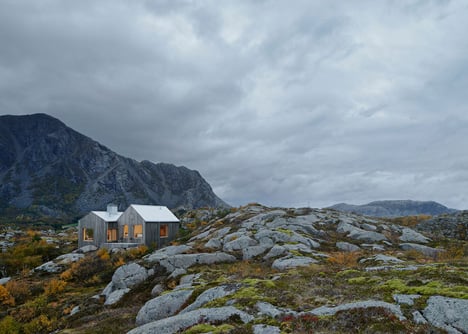 Not far from the site, near the ocean shore, stands a group of traditional seaside huts, in Norwegian called Naust, whose forms and materials reflect many years' experience of building in these conditions. The outermost hut shelters those behind – the huts being placed at odd angles to each other, partly due to topography and partly due to chance. The windowless weathered wooden facades have a straightforward tectonic and a strong material vocabulary. 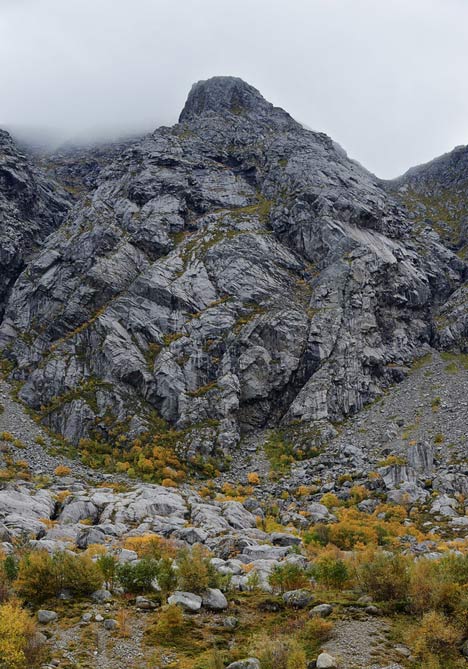 We believe that good buildings engender the refinement of everyday life, having a curious, evocative and empathic nature. We have aimed to build a contemporary Naust with an unpretentious presence and a distinctive character, developing themes from the vernacular architecture.

Seemingly growing from the landscape, the house sits on a rock beneath a granite shoulder negotiating the uneven terrain. As not to disturb the dominant view towards the sea, access to the house is given through a narrow natural ravine densely grown with gnarled birch shrubs and laid out with sea-sand from the nearby shore. The landscape remains untouched and wild.

The large windows of the house face three directions, each with its strong unique characteristic. They are simple and robust in detailing and the optically white glass conveys undisturbed frames of the ocean, the mountain range and the bedrock.

Organised on two levels adapting to the terrain, the plan is compact, providing generous social spaces within a limited floor area. The upper level is comprised of smaller scale bedrooms and family rooms, whereas the lower level is a large gallery-like space structured around a stone hearth. Completed in linseed oil painted pine with untreated birch skirting, frames and reveals, the interior is kept subtle with a character of being hand-built, promoting tactile qualities and the attractive patina developed over time.

Upon completion of the house the clients' father, who spent his childhood in the close vicinity, visited the cottage. Being able to sit down - for the first time - sheltered from the elements; he stayed seated for several hours silently observing the ever-changing light over the sea